As I told you last time, I got his heap of chillies from a bloke in Berlin, Volker. Now this chap grows all on a balcony, and doing mighty great with it. He makes recipe’s I wouldn’t dream to make for they are far too hot for my family, but I noticed he grows chillies with taste. He is able to get the taste even though his food is crazy hot, and he is genuinely looking for more taste. Now that is what chillies are about, not just being hot hotter hottest, no having taste !
So he is sort off in the same race to get more tastes. So he is, sort of a partner in a quest to look for taste in chillies no matter how hot they are. Cool

Soo, I got the Scotch Bonnet Fooderama to taste and after the last Scotch Bonnet I did taste I am a bit worried. Now this name Scotch Bonnet I always thought is a bit weird now isn’t it? I have a bonnet on my car, which is a Reliant by the way. No kidding though I had to search for the meaning on this Scott’s Bonnet and it is coming from Scottish Bonnets a type of headwear. So the name from this chilli comes from the resemblance of Scottish hats, great. 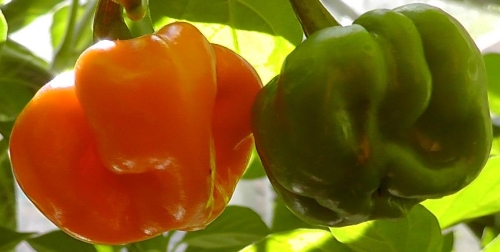 I love the look of this chilli, great forms and all, and he colour is great. Just about your lovely orange and I would say bright. It has a different smell, far from the Habañero but also far from the Trinidad Scotch Bonnet.

So, taking extreme care, I tasted in between the seed lists of this chilli. I took the tiniest bit mind, not to be scorched again, no burn. The smell is being different from the red one, with less herbs but stunning fruits. Took a bigger bite and the taste is strange, it has the herbs be it less than the Trinidad Scotch Bonnet, and it has loads more fruit. It got a weird and lovely combination of sweets like the ones from pineapple, carrot and peach, this is one weird chilli. Next to the sweets, herbs and fruit is has a slight detectable earth note to it, maybe a bit of wood. The burn is different too, not overpowering and not all over, good on the tongue a little on the cheeks and gums going slightly to the back. 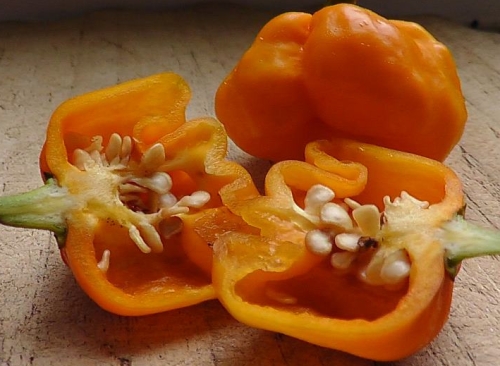 This again is not a chilli with Habañero tastes or tones, has no resemblance to the other known chillies or superhots. This chilli stands on its own, does taste like a Scotch Bonnet but with a load of extras. I hope to get my hands on another one to try and cook with one, I’ll bet you, this one will be noticeable but not overruling your food, and will give it just that Caribbean touch without scorching your palate. Sure it is a chilli on the higher end, but use half and you will be stunned with its flavour and taste !

As I ate them, I could not make a picture, so thanks to Volker for providing the images!