Again from Volker out of Berlin I got the Aji Golden. Up to now the Aji’s have both been great and disappointing I have to say. It is a difficult group or category to taste, some are really awful, a lot of them are close in taste and have minor differences. However, a good few really are brilliant. The subtlety in taste  compared to their burn is a bit off at times.
The more seasoned chilli eater will notice the differences better than the novice chilli eater. Then again, if you take out the seed lists, and keep the flesh they are marvellous in salads and salsas. You could even wiz one through tomato juice giving it a nice touch. Some of the Aji’s have a bit of sour or freshness to them that will compliment a salad. Aji isn’t actually a botanical group, but will tell you more about this later. 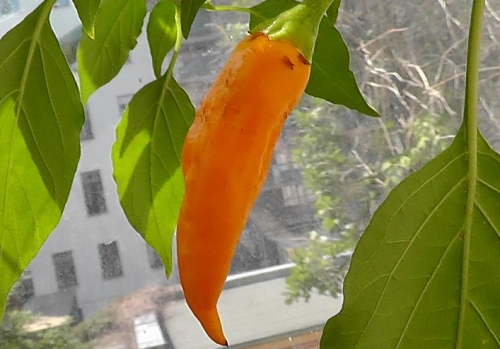 Now this Aji Golden is really a great looker, and really is gold. The chillies are in full sun almost translucent and a great sight to grow in your garden at summer. Yes, I love this one. I am a bit in doubt if this really is a original Aji, as the name is not spanisch, but I don't really know. It is a hunch.

The taste: This chilli is sweet, tastes like a Bell pepper, you know a nice sweet yellow Bell Pepper. It has a slight but noticeable citrus in it and no sour at all. There are more fruity tastes in Aji Golden, I can’t really name, it just has more. The seedlists have a slight bitter in them, not too much but just a little, actually complementing the other tastes, maybe giving it a hint of grapefruit. Now, some Aji (Capsicum baccatum varieties) have a strange thing, they have the taste and smell a bit from the outside of a tomato, or rather the leaves and stems. Sometimes it is hardly noticeable and not disturbing the taste, and at times it is bloody awful. If it is hardly noticeable or just a bit, it doesn’t really ruin the taste. This Aji Golden has none, none whatsoever. 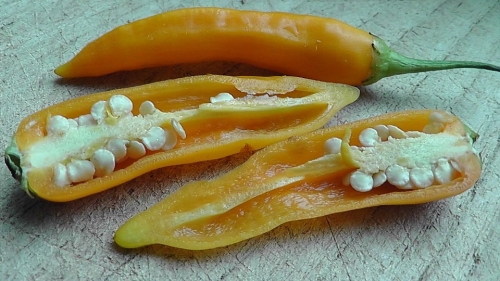 I think this Aji Golden is the Zen of Aji’s, great balance. It has sweets, having a great taste of fruits and Yellow Bell pepper and the tiniest bit of citrus. The burn is a bit upfront and not for the weak hearted, but if you take the seed lists out, most people can handle the burn.

Try a salad with this one!

Thank you Volker for providing great pictures!
Posted by Bart J. Meijer at 23:23