This worm like chilli has been one of the oddest ones I have seen last year. I got this chilli from a friend of mine in Holland as a must taste chilli, and a must see chilli.
He said the tip of it one could eat without a problem getting the full array of tastes it has. Now that is a greatly said but hard to define thing, because how long is the tip of it? This chilli has no tip, but a sort of like butt if anything. Then again its creamy yellowy appearance does make me wonder how dangerous this could be. So I bit the first bit of the top off, and it was great and really a mouth full of tastes. My son had one to, and did the same, no burn. So we both looked like, well how hot can it be and took another bite. . . . . . 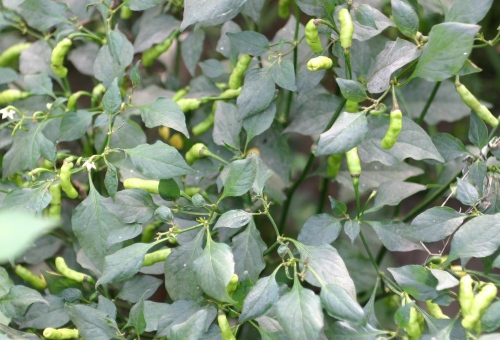 So, this Aribibi Gusano is an odd pepper or chilli, weirdest form, creamy white to yellowish like when it is ripe. More strange, it has a list of possible names about an arm long. Scientifically we are talking about the Capsicum chinense Jacquin cv. 'Aribibi Gusano' but it is also known as Aribibi, Aribibi Gusano, Aji Gusanito, Habanero Aribibi Gusano, Aribibi Gusanito, Caterpillar Pepper, Aribibi Caterpillar, Arivivi Gusano and last but not least Turtle Claw. Now this chilli is supposed to be a chinense, but is also called a Frutescens or a Frutescens / Chinense cross. Now, have I lost you? Well only good as that is how I felt after doing a bit of extra research.

Now to make some clear, chinense is a part of the Capsicum family right? So all chillies are from the Capsicum family, and all peppers are too. The Peppers are from the part of the family called Annuum, so are called Capsicum Annuum. For instance you have the Cayenne chilli, scientifically it should be called Capsicum annuum L. “Cayenne” This scientific stuff would not seem important and sounds like jibberish but it is important. Most people like Annuum chillies and they are among the most used ones in the western world. The Chinense chillies are the group of chillies that bring the hottest ones in the world and have a specific taste that you that you may or may not like. People also call it the Habañero taste, but that isn’t really true. My wife doesn’t like the chinense taste in superhots and does like Habañero, and she is picky. . .

Sorry, this was a taste report? 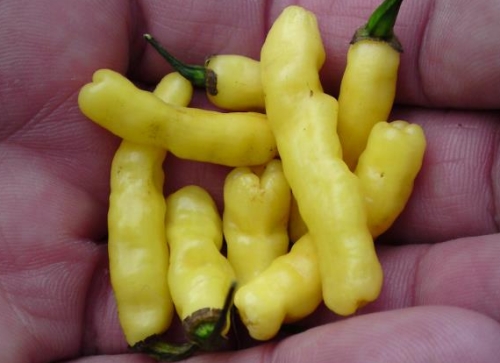 Well, after the first bite, the second bite is overpowering to say the least. It had me and my son running for the milk and peanut butter. This chilli is hot, 150 K scoville easy, but has a matching taste to come with it for sure. It is very perfumy and very rich in taste. If you cut one open and leave it for half an hour, you will smell it throughout the house. It has a lot citrus and sweet wood like a taste that makes you remind of vanilla. The undertone taste that is in the Chocolate Habañero that makes it lovely is the upper tone in the Aribibi Gusano. It is very strong with its Chinense taste and scent, which you will find in the super-hot chillies. This makes this chilli about the most perfect chilli for people that like the taste of the superhots but do not want to go superhot with their food. Due to its size you can dose it very well. I pop 2-3 Aribibi Gusano in 1.5 Kg of Chili con Carne, and 5 minutes later my neighbour calls me he smelled it and if he can have dinner with us! Yes, all in all a chilli that deserves to be in the top 10 for sure !! I do have seeds available, so you can try them too!