Aji Amarillo, one of the Peruvian Aji chillies, seemingly the most used one. It has been brought to the Netherlands by Aji Amarillo en Holanda, to bring the great taste to us. Now I did read up on things before trying it, as it seems the famous Peruvian chef Gastón Acurio recently named aji amarillo the most important ingredient in Peruvian cooking. Now that is a statement to give some expectations isn’t it? Aji amarillo is used in many classic Peruvian dishes, such as causa rellena and papa a la huancaína. Now that sounds promising, don’t you think?

Now this Aji Amarillo puzzles me a bit, Aji means chilli and Amarillo means yellow. This chilli is yellow alright when it is growing, but it ripens off to orange. So what, is it used unripe only?
Good luck as Volker send me aji peru amarillo and that one is yellow and Alexander Groenheide the man that got the Aji Amarillo send me an orange one. 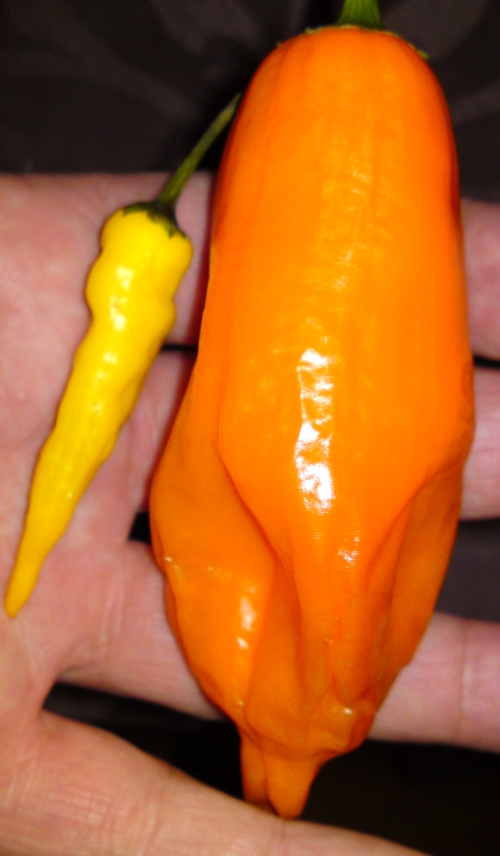 A bit puzzled I dug deeper, read up on things not getting anywhere, and in the end asked Volker. At first Volker said he bought Aji Peru Amarillo for sure and tells me where he bought them. So I searched that site and only found an Aji Peru Yellow. . . . So I asked Volker again and he said; When I bought the seeds, it still said "amarillo", now they seem to have switched to "yellow", maybe to make it more internationally understandable. But it's the same pictures and post that I saw when I order the original seeds.
Ok sorted, they are different, cool !

The yellow one is not really big, but not small as well. The orange one however is huge, Huge I say, my hands are size 11, I cannot even buy regular motorcycle gloves. . . . 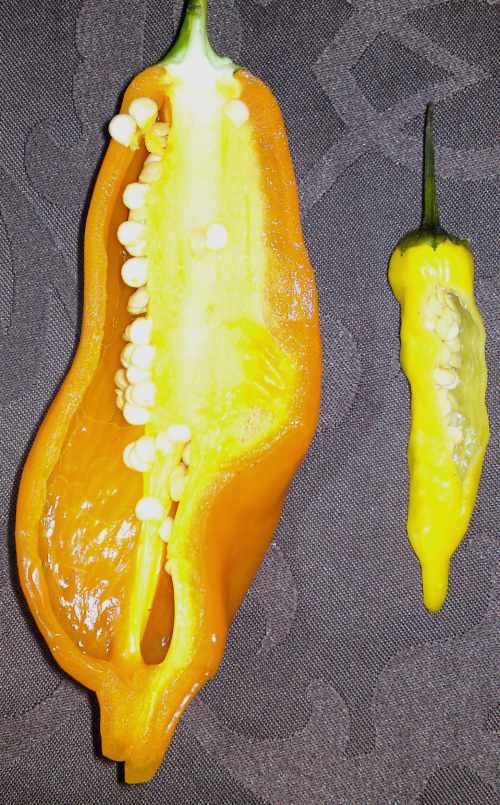 Excuse me for the poor picture

Ok tasting the yellow one it tastes a little sour or fresh, just a touch of citrus in it. The heat is rather high but manageable, and taste is fruity and has some herbs. But this Aji Peru Yellow chilli does have the tomato plant taste in it. The smell of the outside of a tomato or rather a leaf, that is what taste I mean. The real Aji Amarillo however is a whole other ballpark, it is sweeeeeeeeet. Great taste between the seedlists is stunning. It is your perfectly balanced orange bell pepper having both the herbs of a red bell pepper or Paprika and the sweets of the fruity yellow bell pepper. The seedlists have no bitter but have herbs, and loads of heat. Nice herbs that are hard to describe really but that go well with the sweet and herbs in the flesh. I would not dream of talking the full seed lists out, for you would miss out of the extra herbs. But do take out the placenta and the middle part on top.

Stunning chilli and I would love to cook one of the traditional Peruvian dishes with this one !!!