A good friend of mine from Korea Mr. Gunsoo Lim and I am sending seeds up and down the world.
He is keen for superhot chillies, and I am looking for the ones that have a story to them or that have history.

It is not only that we send chilli seeds over the world; we also try to learn about each other’s culture through our food and recipe’s.
So I have gotten seeds from him from herbs, medicinal and for the kitchen, or a combination of the two.

That is where we differ in culture too, for me Endive is a green, good cooked and raw.
For my Korean friend, his food is both food and good for something, be it health or garden anything.
He got me Garland Chrysanthemum or Golden Daisy, as a green to eat raw, be it good for anything, I hate it.
The flower is superb looking, good and healthy an all, not food in my mind.
However, I got Korean Perilla from him as well, good for the soul and for the stomach.
The seeds are used for oil, and that oil looks a bit like sesame oil, that is why this herb is called sesame leaf.
The leaf however does not taste like sesame at all.
Now sesame leaf is an herb one shouldn’t miss out off, it is superb to drop in your stir fry at the last moment, and has a fantastic smell and taste to it.
Hard to describe, I would almost say it is peppermint, without the pepper. Sort of like the menthol is skipped in the herb, and the tastes behind that in peppermint has gotten stronger by 5.
It has a bit of sweetness about it, that you taste when it has just touched the pan for a bit, raw it is more strong of taste.
My friend showed me, they eat sesame leaf raw, folded as a parcel.
In this parcel, there is a clove of garlic, a piece of chilli, and a spoonful of soy pasted.
Have to try that this year, a bomb of taste for sure!

Man this is getting long, and I even haven’t started about the Korean chillies.

After months of searching, my friend Mr. Gunsoo Lim had found 2 rare Korean chillies and send me a note that he had something special, not saying what.
Another month later, he told me he had asked two farmers to send seed from special chillies, which are not even for sale in the market or at seed stores.
To me it sounded a bit strange, but later he told me, there were just a few farmers left that grow them, as they aren’t commercial enough these chillies.
Ha, now we’re talking aren’t we?
So he had these farmers send seeds from east to west in Korean, from a very isolated area, and that took its sweet time.

Waiting is half the fun, so I read up on where these chillies come from.

The soobicho pepper (Soobi cho) and the chilsoungcho (Chilsoung Cho) both come from a county in the Gyeongsang province.
They come from the Yeongyang County (Yeongyang-gun); This an inland county in the north-eastern area of North Gyeongsang Province, South Korea.

The soobicho pepper is cultivated since the 1960s, with a hot and sweet taste.
These chillies are susceptible to pests, so must be grown with great care.
They have a low yield, and are now only grown in low numbers and small areas.
The chilsoungcho chillies were popular in the 1980s, and lately are hard to find.
Its chillies have the form of a Crucian carp. The taste of this pepper is mild and sweet.
These are the 2 very rare chilli seeds that came to me now about 2 months ago, and almost proud to be here in Holland, they grow big and proud, and are the largest plants I have now.
Chillies from Yeongyang, where people sing about their chillies, not joking it is true !

An isolated area difficult to access, Yeongyang is sometimes called an "inland island". The county has the lowest population of all counties in North Gyeongsang Province, being mountainous with deep ravines, and only 10 percent of land is cultivable. The county is famous for its apples and chili peppers, and is home to the Yeongyang Chili Pepper Experimental Station. From 1984, the county has elected a "Miss Chili Pepper" to represent Yeongyang chili peppers.

The area is also known as a centre of literature, with the tradition of scholars reading and reciting poetry deep in the mountains. I love poetry!

Writing this down, I see myself discovering this regent, eating their apples, chillies and tasting their recipe’s.
After experiencing their great hospitality, and good food I will climb a mountain there.
I see myself reciting my poetry, in the woods on the mountains in Yeongyang! 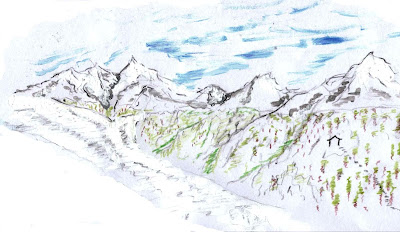 but tell it no woman,
or,
tell it to no man,
how much I love you.

For men can not believe,
that a man loves a woman,
like the way,
I love you!