I think they are. In all the time that I have been informing myself by reading, listening and looking, I have not ever found as much as a word about Korean chillies.

This is strange as the Korean cuisine is different from many others, although you see the influence of nearby countries . Still, the Koreans like to do it their own way, even with chillies.
I have been reading up on the Korean cuisine, and found a wonderful site from Maangchi, it differs for sure and it is lovely.
Wise with culture I would almost say, their cuisine is understandable, and honest.
You can see what goes in, and almost by the look of it, know that you like it.

Now their chillies, to say the least, are a world apart. They have their own chillies, and more then just one or two. They have loads. Some come from little counties, and mountain areas, some are just commercial.
But all of them are their own. 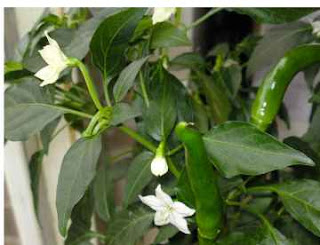 They even have their own herbs, as if they are living on a secluded island.
Perilla is known in the eastern countries, also in the US, but they have their own. And again, it is not like any other, it is special!
Their bonnetbell flower is different; now I wouldn’t spoil you too much with other secrets, and leave that to an other time.
We're looking at chillies today.

Koreans have a different approach to chillies to where I (and most of my readers) come from.
They describe their chillies with how they taste, and what they can do for you.
What they can do for you in the sense of health and good.
So one they are promoted for being good for the immune system, speeding up your metabolism, being good for people with type 1 diabetes, and even for heart problems.

The chilli was introduced in Korea by the Japanese, in the 17th century, where the Japanese held monopoly on “japanese mustard” as Portuguese missionaries called it.
They did obtain seeds at some point, even though they were told that chillies could only grow in their original habitat. good excuse at the time, but now Korea has loads.
It is said that the Koreans eat the most chillies per capita in the world, and they export over 1 million Kg per year.

The first Korean chilli I ate, and have growing now is the Cheongyang Gochu, said to be one of the hottest chillies in Korea.
It is said to be good for the health, waking up the digestive system is mentioned, as well as its capability to clean the body of disease in the digestive system. It is also praised for keeping food from going bad, and is even used to make hand sanitizer.

This chilli comes with a story, as there has been a quarrel about the history of this chilli.
The Cheongsong regent or county claims it is theirs, as they clame it has been developed by crossing a sweet pepper and Thai chilli. They say the name comes from where it was developed. And they claim it was developed in Chongsong and Youngyang, hence the Portmanteau, "CheongYang”
The Cheongyang county however claims it has been developed there, in the 70’s by the Agricultural Technology Center. The manager from Agricultural Technology Center claims that he does not have the records, but just was crossing hot chillies, and found this sort as a nice and stable result. 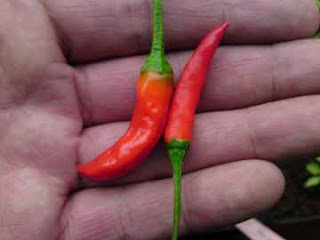 Ok, taste and appearance;
It is sort of a strange chilli plant, with nice white flowers, and has its fruits in clusters from 3-7 chillies.
It is not a Capsicum Baccatum or C. Chinense, but looks more like a C. Frutescens.
This chilli is both used green and red. The taste when green is odd, like a crossing between a green Jalepeños and a Rawit, great taste, and a long lasting burn.
Red however it is far hotter, and the taste resembles a Piri Piri more or Rawit.
It is said to be between 10K scoville and 30 K scoville, and believe me it is hot !
As the chillies are not huge, 10 mm thick at the biggest and about 40mm long at max, you can spike your food in steps with ease.
For “normal” people 2 or 3 will do just fine in a curry or a stir fry dish, and hot heads can chuck in a hand full.

More to come about Korean chillies !