Having the best seeds from you chillies, buy tea!

No worries, this will make sense to you later.

I have been growing chillies for some years now, and I do love them.

I have gotten some great and special seeds from friends all over the world, and I do like that sharing thing. I cherish those special sorts so much that I would love to have them next year as well. Maybe I can share some of them back to others, give a friend some seeds I got from another friend.

Now in order to do that, I need, really need those seeds to be 100% the way they were. They need to be pure and not mixed with other varieties.
Sure it is fun to have an odd and unexpected variant, but I really more prefer to be able to say that in 10 years I still have the greatest chillies from friends all over the world. Not talking about the few I bought to taste, and gotten approved to be part of the family here, but I should take those in consideration as well.

Hmm, I should work on those intro’s getting them shorter. Or shouldn’t I?

The chilli plant has flowers but still is self pollinating most of the time, with exception to 1 wild sort. Still if a bee can get to it, it might cross pollinate. Some of the sorts even pollinate before the flower is open, but one never can be sure. One better should be safe not sorry, so I will talk you through some methods.

Isolation is the thing, so in one way or the other you need to isolate the plant or its flowers, from animals that can pollinate them. Now the most simple and obvious way would be to put them at a place where they cannot be pollinated. I do that with plants at times, just putting them in the house until they start forming fruits. Unfortunately, that doesn’t work all that well, due to the difference of humidity in and outside. Last winter I placed a Cheongyang Gochu ( Korean hot chili ) in the house, and when it started forming flowers, it started dropping them at the same time. This kept on going, until I placed a bowl of water just under the plant on the heater. That sorted things, and the plant was full of fruit ripening a month later. So, it was a good idea, but I’d rather do it in summer, when you might have more success. You can even help the plant if it in indoors with giving it a little shake every day, or pollinate the flowers with a small soft paintbrush. 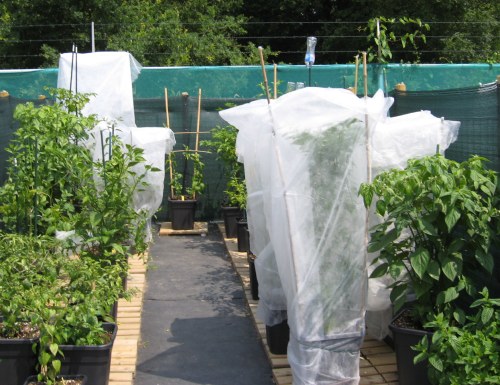 If you have an allotment, and a good amount of space, isolation can also be done with distance. The distance for chilli plants to be isolated is 9 meters. Now sometimes you can put another sort right next to it, but do check if they can cross pollinate. I have Rocoto chillies next to my Cheongyang chillies, no problem as the Capsicum Pubescens ( Rocoto ) does not cross with Capsicum Frutescens. 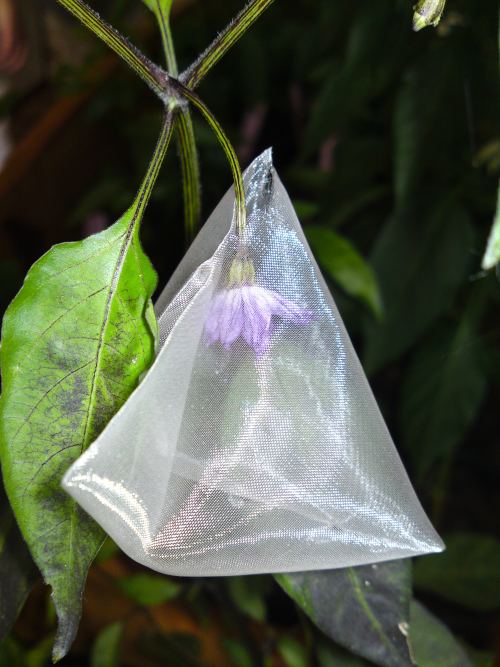 Image made by me

Now if you only want some seeds, for coming year, I urge you to buy tea. So now we are back at tea again? Yes we are, as teabags are amongst the finest solutions to just isolate one flower. Just put a teabag over a flower that has not opened yet, and leave it there until the fruit starts to form. Weird thing is, if you buy those pyramid bags, the cheapest version often is better than the more expensive ones. So artificial aroma’s in tea or not, chuck the tea away after you have cut a tiny slid that will fit the flower bud, and put it over the flower. An average chilli fruit has more than 10 seeds sometimes they have up to 70 seeds or more. These pyramid tea bags are made from plastics, so they will last forever and can be used for the same plant over and over again, after the fruit is forming take it off and put it on another flower bud, but do not forget to mark the flower with a piece of wire or a freezer bag clip! 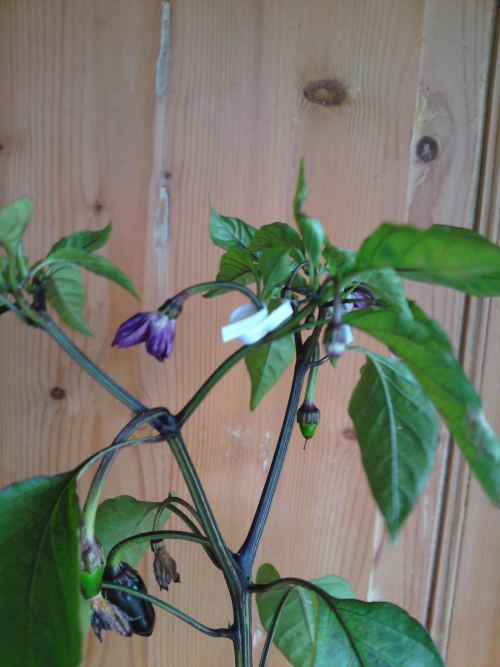 Image made by me
Some reform shops have empty teabags for sale, in Holland 100 teabags for just 1.5 Euro. Those are paper bags though, so can’t stand rain for too long. 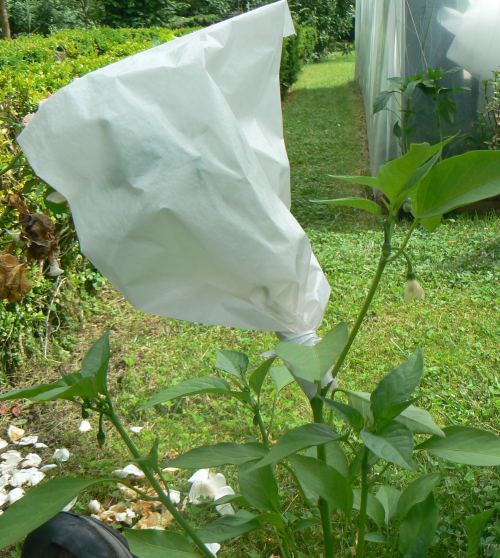 Image kindly provided by Bountiful Seeds
If you want to isolate a branch or more than one flower, the organza bag might be an idea. I know in France bags are available for isolating flowers, but I have not seen them in other countries yet. I know that Bountiful Seeds in France use them for the best result of isolating branches with flowers. As I haven’t seen any of them here I will use organza bags, they are cheap and ready to use and available up to the size of a sleeve. If you can’t get them or rather make them yourself, get busy with a sewing machine and some tulle netting which is the same.

One other method I heard form Firechillies.fr is to get the petals stuck from the flower with wood glue so it doesn't open up. The flower will self pollinate without opening, and when the fruit starts forming the chilli will chillies crack the glue, come out and grow.

I know some seeds companies also have another way. They have compartments in their greenhouses, which just have 1 sort in them; this however takes a lot of space. Fine if you want to do just a few sorts, but with me it will not work. I am not a professional grower with loads of space, even though I have 105 sorts growing now. So I will keep to teabags and tulle netting.

And you? Off you go to get some tea, and chuck the tea again, just use the teabags !
Here is the next post, how to get and keep your seeds and save them fro a long time!