Now, just yesterday I told you about these hairy chilli plants called Capsicum pubescens.
Other than the pubescens or Rocoto chillies, there should be no other hairy chillies, and as always there are exceptions to almost every rule. Pubescens are hairy, and this Goat’s weed too, and it is not a pubescens, it is an annuum.
Annuum is most known is this part of the family for the bell peppers and a good few chillies, but not for hairs. This exception however, is one beautiful one. This plant is one stunning looking one carrying a load of chillies that are upright, and very odd. The fruits colour from black, green and red sticking out of the plant almost. And I could imagine a goat just grazing off the peppers without harming the plant, but I don’t know if the goat would like them. 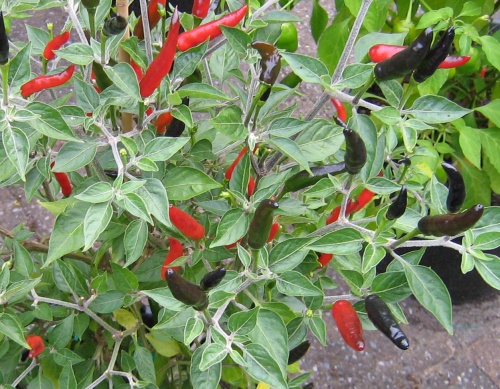 There is one odd thing with this plant, I found so many names it is silly. Still to all the worldwide discussions it is not really sure if they are the same, or not. Minor differences are mentioned, but not really big ones. So are they the same, I don’t know, but here are the names I have found so far. Goat's Weed, Black Cobra, Chile negro de Arbol or Black Dragon.

Now, with a lot of ornamental chillies the taste is either boring or bad, but is this an ornamental? It certainly looks like one, and I wouldn’t mind having it in the garden. I’ll bet you it will stop a lot more people to look at my front yard if it would be there. This is one stunning plant that almost looks like the mist has frozen over this plant, and made these lovely crystals of ice covering it. 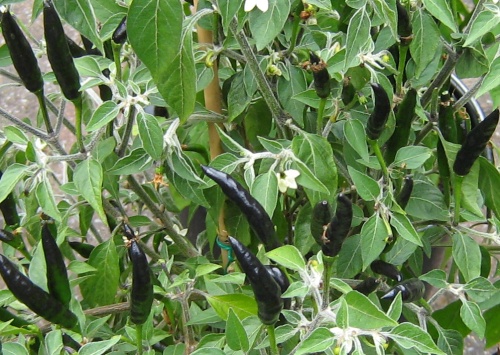 So I was a bit puzzled when I was asked several times to taste this chilli, as I really thought it was an ornamental one. I even got them send from Holland and from the USA to taste, in various colours, to even try the different stages of growth and colour. Now ok, I am not that difficult, so I tasted and was amazed.
Green it tastes like green Bell Pepper, herbs and has a very prickly heat, a lot of heat.
Black it tastes really in between, and does have a great taste herbs and greens, pins and needles heat.
Red the heat seems to be a bit less, and less pins and needles, but a flash burn that dims out to an overall heat. The taste really is nice, Paprika, herbs and only very faint fruit tones. I like it, a lot! It is a scary hot chilli pepper with taste to match and the looks are superb. 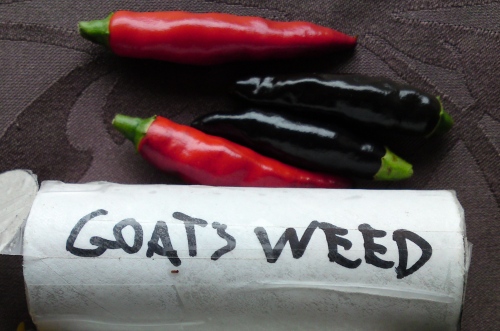 Naturally ripened or cured I tried as well, as, if you have the plant you will not be able to keep up and eat them all. So if you have this plant, you will need to dry a few at least. Dried they have a stunning herbs taste, with the background taste that you will get in natural cheese and natural. The herbs are more outspoken dried, having a touch of bay leaf and liquorice, and its heat is overall stingy but not unpleasant.

Jolly great show this plant, and tasty too, but watch it ! It is HOT !