From a guy at the camping we are staying at I got this Flying Goose Sriracha Chilli Sauce Extra hot, as I told him I review, make and love hot sauces. He was a bit scared trying to taste it, as he thought it might be a bit too much for him. Mind, this guy was coming from Surinam, so he should be used to some hot food. So at a BBQ we had with a few neighbours at the camping I opened his bottle and took a teaspoon to try it. This stuff is hot, really hot, but had a good taste and a good after taste. Having a nice sharp direct burn, this sauce really lets you know directly what you eat heatwise, not building and not in the throat that much. The taste is superb and vibrant, having chilli taste and nothing but chilli, or ingredients that complement the chillies used. I tried it on bbq-ed sausage and bacon, and that dampens the heat a lot, also when used to make Satay Sauce it loses a good bit of heat. That said it is a brilliant sauce, which can be used on practically anything. In combination with sweet soy sauce, it however is something I don’t like with this particular sauce.

So after using it a week, it reminds me a lot of my own basic Sambal Oelek( Ulek in Indonesian ) be it that this stuff is a bit more salty. Compared to my own Sambal, this sauce is about 4 times as hot, with the heat not overruling the taste, perfect balance I’d say! So I decided to give the distributor Heuschen & Schrouff Oriental Foods Trading BV a call, to see what information they had about it. I got a certain Mr Luyten at the phone from sales, and he was kind enough to provide me with some information and some addresses from places where I could buy this. I also took a look at the name Sriracha or in Thai called sot Siracha and its history. Now the first thing I notice is that it also is called Nam Prik Siracha, and that is????? Well, Nam Prik is the name used in Thailand for pepper pastes or sauces that closely resemble the Indonesian Sambal Ulek ( Oelek in Dutch ) so there you go, that is why I thought it tasted like my own basic Sambal! I love this stuff to death, wouldn’t mind eating a whole bottle at all. That said, this is not a shabby little bottle you would empty in a week, my bottle is 450 Ml for a price of around 3.5 euro! Now that really is stunning value for your money, and your regular hothead would not finish this bottle in a week or even 2. Then again, you really can put this stuff on anything, even my cheese sandwich goes down way better with this sauce.

Looking in the history of the name, Sriracha comes from the town named Si Racha in the Chonburi Province in central where it was possibly first produced for dishes served at local seafood restaurants. It is a chilli paste with distilled vinegar, garlic, salt and sugar. According to Wikipedia ( do not believe all that is written there ) the sauce is called sot Siracha in Thai and only sometimes nam phrik Siracha. Traditional Thai Sriracha sauce tends to be tangier, sweeter, and runnier in texture than non-Thai versions. Non-Thai sauces are different in flavour, colour, and texture from Thai versions as they are often adapted and changed for the local cuisine. In Vietnam it is more often used as a condiment for fried noodles or as a topping on springrolls. 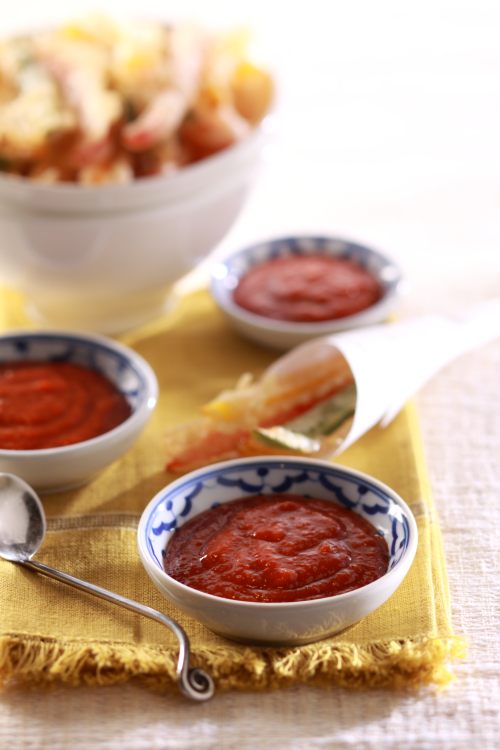 Now this one, has got no garlic and I am glad about that as garlic often ruins the taste. It is not a sweet and sour sauce, it is salty if anything. Great compliment to chillies I'd say! Heat I would say at least and 8, compared to my Sambal being a 5. It is a bit salty but if you use just a bit less salt in your food, it is downright perfect to put on anything. Boring cheese comes alive, any sausage or springroll will see this as a compliment, and it is the perfect spice up for a stir fry. Price is stunning, good value for money and as close as you can get to my own sambal, having nothing too much to overrule the taste of the chillies. It is not too runny, and the bottle is perfect for pouring and dosing it on food or snacks, it has no seeds and is lovely smooth. 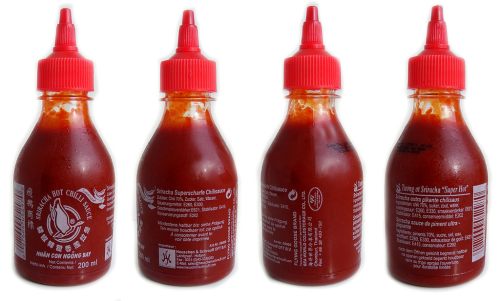 One negative note, it has got additives that are rather normal like citric acid and such, but it also contains E621 (sodium glutamate or ve-tsin ) Although being used for ages in the Chinese and Indonesian kitchen, it might not be for all people and there have been negative reports about it. I never use it myself in the kitchen but I know a lot of people do, even the restaurants in the Netherlands use it a lot. Last year I noticed some restaurants starting to advertise they don’t use ve-tsin so maybe this factory will stop using it in some time. The ingredients are: Chilli, Sugar, Water, Garlic, Flavour Enhancer (E621), Acidity Regulators (E260 and E330), Stabiliser (E415), Preservative (E202)

Even though it has Xanthan gum in it and sodium glutamate, and I normally do worry about that, I can’t stop eating the Flying Goose Sriracha Chilli Sauce Extra hot, hmm that is principles out the door when tasting something great??