Trinidad Moruga Scorpion going for Guinness record, or just going for your money?

In my quest to find out more about these so-called new pro-claimed record winners, I have had a good few emails and questions, why I would dig. Or why it is an interesting topic even. Note these questions have only been asked by people in the chilli business, or affiliated to it. Most of the time, I do answer; I am trying to follow the money. But as soon as the word money drops, all gets silent, or I get answers like “I am just earning my living”.
If I also hear from growers of the next possible runner ups, that they get over 1000 emails per day begging for seeds, do the calculation yourself for 10 dollar per 10 seeds or more.. Nothing wrong with it, if it really is a winner, but you know what? You need to win first, before you are a winner. 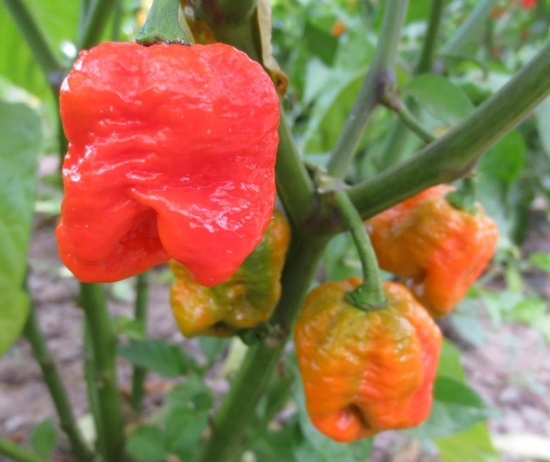 So, the Trinidad Moruga Scorpion, Trinidad Scorpion “Moruga”, TS Morouga, and TS Morouga blend, that are the pretty much the same, has been announced on 5 February 2012 by NMSU’s ( New Mexico State University) Chile Pepper Institute (CPI) as the hottest pepper on earth. Jim Duffy from Refining Fire Chillies provided the seeds to the CPI and comes in several media for that and sells these seeds from this “Hottest pepper on earth”.

Nothing wrong with that sofar, however. . . .
A lot of controversy is there, as a lot of debate all over the web starts about the facts and numbers, and the question rises for proof and the publication of this proof.
Proof of this scientific research and its research gets published by the American Society for Horticultural Science in the Hortechnology issue August 2012 22(4) under the title: ‘Trinidad Moruga Scorpion’ Pepper is the World’s Hottest Measured Chile Pepper at More Than Two Million Scoville Heat Units. This title is somewhat better and I will explain this. 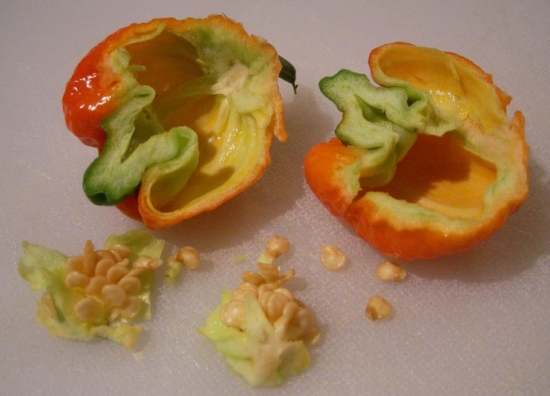 But first, where does this chilli come from? It has been found in Moruga, Trinidad in the Caribbean’s. It is found by Sara Ragoonanan, who found a lot more superhot chillies in this region. She, and I quote: “I found it in 2007, it was used as a vegetable. I used it for hot sauce. That's how I discovered this variety packed heat. I knew this was the variety I was searching for, I would first dissect the pods, and take some seeds out for growing. I did start trading seeds with no charge to growers worldwide. At that time I did not think super hots would get this recognition. “
She shared them with several people amongst others with Christopher Phillips, who shares them also wtih Neil Smith from the Hippyseedcompany and Marcel de Wit from the Chilli Factory. I love it, that sharing bit!
Those last two tell me both they have send seeds to Jim Duffy and Jim tells me he got it from Jukka in Finland. Funny in between the lines this great chap Neil Smith, is dyslexic so he miss spells the name Moruga to Morouga. So almost another variety was born. . . Sorry, drifted off, so after this trip around the world, let’s go to New Mexico.

Proof:
For testing SHU (Scoville Heat Units) the Chilli Pepper Institute grows chillies on fertile fields along the Rio Grande, in a high desert country, 1200 meters above sea level where the sun always shines, the air is dry, and only20 cm of rain a year. Well, that is bound to give good results. They performed an excellent test by the first look at it, testing the Trinidad Moruga Scorpion, Bhut Jolokia, Trinidad Scorpion, Douglah Trinidad Chocolate, and Trinidad 7-pot Jonah to see which variety has the highest average measured heat level (mean) and how the chile peppers are related, using molecular analysis. Now, sounds great but I would have loved this research to compare the others to the current Guinness Book of records chilli, the Trinidad Scorpion Butch T.
And they do not? Well, they could not get the seeds at the time they answer by mail after asking.

Even though the publication of this research in HortTechnology at first glance looks great, it is wildly vague about how many plants there were planted it their test fields, and even do not name a specific number of pods tested. This is a bit strange, together with the title “World hottest measured Chilli” Then if you want to read the issue from HortTechnology, or the part that has the research the answer is: It is copyrighted so, you have to pay money for it. . . .
After asking by email the CPI replies: We harvested 30 pods per plant, randomly picked from different places all over the plant, 20 plants per replication and there were 4 replications.
There were 2,400 pods harvested from each variety.
So the article should have been clear on that. 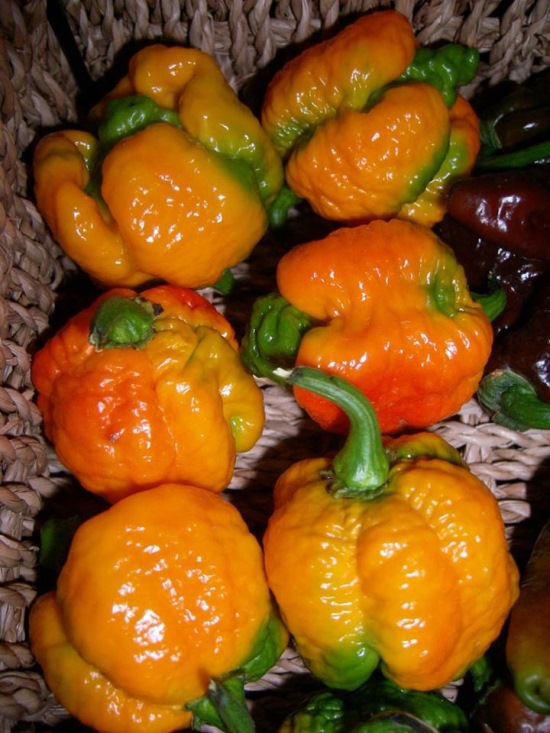 The result from all this testing is clear; The Trinidad Moruga Scorpion has peaked at 2,009,231 SHU having a low at 953,703 SHU and an average heat level (mean) of 1,207,764.
So is this now the new Guinness Book of Records chilli? No, as the other winners had to proof average (mean) heat level, and this chilli is 200.000SHU+ under par.
So is the “World hottest measured Chilli” No, as we haven’t seen publications of research by others, nor their test results for highest measured. V ( Nor is the Trinidad Scorpion Butch T tested for this at the CPI themselves either.)
Why? It is not important what the highest is, it is important what the average is if you want to make produce with it. Would I want to use it at home? No, as I have 2 kids and a wife, and I would not like it to play Russian roulette with food that can be twice as hot depending on which plant you took a chilli from.

Still, seeds are sold as mad, so from this self proclaimed title money is made. People contesting this “record” are being told that the other record breakers are not tested by a third party.
SHU measurements would have been done by colleges or second grade laboratories.
Only one pepper would have been tested and other rubbish.
The lab equipment would not be calibrated with the other labs, etc etc.
Well for SHU measurement there is a standardized procedure that any labrat can do if he has the tools.
Even the scale at the local butcher is calibrated every year, so what do you think they do in a lab, smoke pot?
Even Guinness is attacked: “Guinness is Independent and nothing but a record keeper and record publisher. They are not a scientific organization. They can make their own rules and set their own criteria and change it anytime they want.” ( Guinness when I called them, asked me to provide links to these statements, and to send them on to their legal department )
These poor excuses was what tickled me to look further into things, as they sound to me like poor excuses, or as poor advertisement for a chilli that is not a winner.
And claiming victory on a self proclaimed title of “World hottest measured Chilli” is too silly to step in to.

Weird enough there has been more controversies with the “New Mexico Scorpion” as well. This was also claimed to be a new found variety, that later was discovered to be a renamed one. 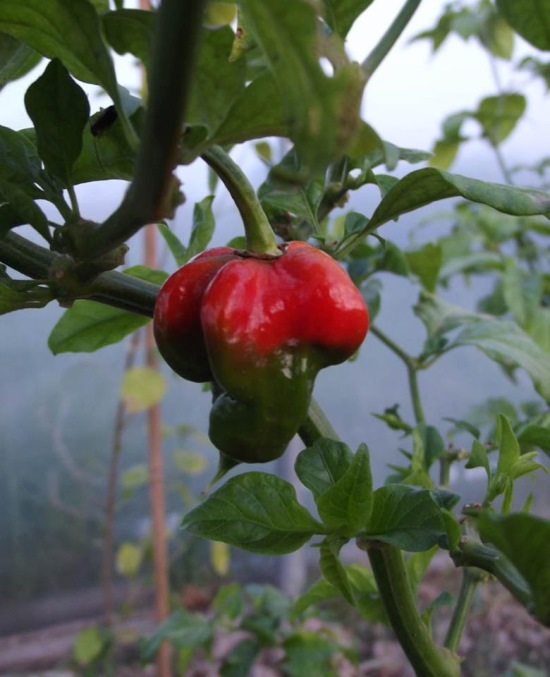 Anybody telling you differently just tell them to read this ... and yes we have had to send a scientifically correct tested, backed up by THREE horticulturists, pack with lots of information to Guinness World Record to PROOF we did it Scientifically!

All in all I think it is great that a chilli grower works with  the CPI, and is giving away loads of seeds to research, as others did not. So I hope Jim Duffy can select the hottest plants, topping at 2 million SHU. If he gets that one stable at say 1,8 million SHU, I bet nobody will go over that mark.

If you want the hottest, ask for proof, if there is none I’ll bet you. . .
There is none.

Bart J. Meijer
Images by Chris Fowler, a chap in the UK with excellent seeds as well!
Posted by Bart J. Meijer at 23:59