Now my friend Henry and his friend Beppe from Italy send me one load of chillies you would not believe! They selected the ones I needed to taste, although they have a lot more, they wanted me to taste these ones. So I dug in and as it appears, with the first bite I made a mistake.
Now excuse me please, but I did get a little excited unpacking, and got punished. I unpacked one, bright yellow and a little orange, not pointy but irregular in a funny way. 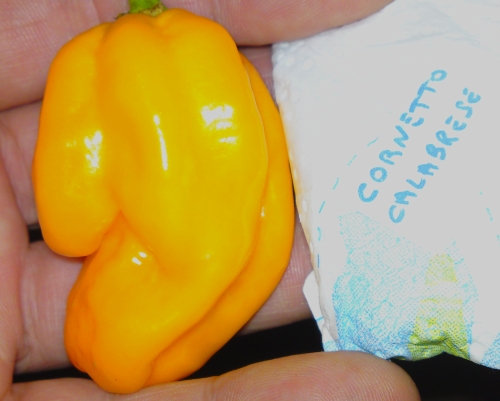 The paper next to it said Cornetto Calabrese, so not knowing it I was taking good care but took a rather large piece from in between the seed lists. I felt like a chilli rookie again, man that pepper had me sing. Good grief it was hot, but tasty never the less, but boy did I sing. So I asked Henry if they always are that hot. Well then I understood I need to learn to speak and write Italian. Who needs Latin? 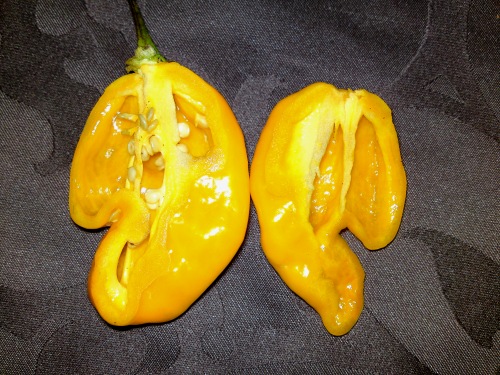 So, I thought I’d better taste on, I will get it later. The scent of this chilli is great, perfumy chinense, with fruits and sweets. The chinense part that sometimes has an irritating overtone in both smell and taste is not there, it is in balance. So tasting again, but more, much more careful. Tastng and smelling I get a scent and taste from Tea Rose, perfume. In the middle there is no sweets, no paprika but fruits and a bit of metal like bleeding. You get that in times if you eat superhot chillies like these. Rinse with milk and get back at it, smaller bits I take. In the tip of it I find a bit of sweet and tastes like pineapple. A little piece from the middle does give me a bit of a bitter, but not irritating as such, and again the tea rose and the perfumy chinense. At the top however I get apricot and tea rose as well as some paprika taste. This is one weird lovable chilli that is extremely hot, far hotter than a Fatalii. 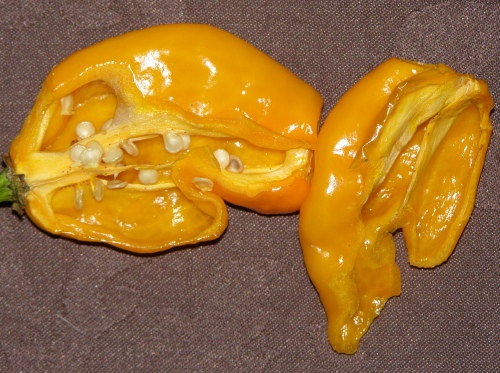 So again I have a chat with Henry from Italy, asking what it is. In the end I show him the picture and the label that I thought belonged together. “Ah” Henry says “that is a Bhut Jolokia Yellow, and the best he has selected over more than 10 years”. Every time he only takes seeds from the plant he likes best, and sure did one great job. This my good readers is one chilli to respect, not feared, but used in little bits if you don’t want to be scorched. But this is a chilli that makes me think of a great Chili con Carne, that is subtle on the herbs. Good grief Beppe, I am so digging in the next one tomorrow. Thank you ever soo much, this is a superhot chilli I love !!