Taste review Sichuan (Szechuan) peper or the spice the west forgot to steal.

Now this is an odd way to start a post, with a title like that, but you will get it later.

This pepper that is not a pepper at all, is one weird thing.
Somewhere down the line in history things got confused and the word pippali from the ancient Dravidian language (India) word for long pepper (Piper longum). Via the Persian people it landed in the Roman empire. The Romans however, turned pippali into the Latin piper which was used by the Romans to refer both to black pepper and long pepper, as the Romans believed that both of these spices came from the same plant. And they do not. Now as this piper was getting expensive, people started looking for alternatives, cheapest being the black pepper. Now following this mistake after the Roman times even the melegueta pepper was called piper in the 15th century, and after this the Portuguese dicovered the Portuguese peper (chilli ).

So, with all this history I read for hours again, I get the distinct feeling that more and more the name pepper started getting to be used for a herb or rather fruit that has a mouth feel being spicy, hot or prickly.
The Szechuan is not just a district in China, with Chengdu as its capital. And actually it is Sichuan, the Cantones write it like Szechuan. And no the Sichuan (four rivers) province is not just a province, it is almost a culture on its own complete with its own typical cuisine, fantastic. I will tell you more on a later occasion about the Sichuan cuisine.

The Sichuan (Szechuan) or flower pepper belongs to a cuisine, and I heard about it years ago, so at one point I could get them and some more of their typical spices. That name is odd and confusing as it's Sichuan, 4 rivers, Szechuan is how it appears on most menus as it is how Cantonese tend to write it...
Anyways, the utter disappointment was big as the taste was not at all that good. Now recently I got a mail from China Spice in the UK, that I needed to taste this Sichuan flower pepper that they hand selected at the spot in the Sichuan regent. So to be honest I was sort off like, sure, I can, but will it really bring something? I have heard and read soo much about their cuisine, but tried and failed, and thought nothing of it.

Curiosity killed me when I got the parcel so I simply had to dig in. Most of all actually as I was warned that the effect of this flower pepper might ever so surprise me. When I opened the bag, the aroma immediately came towards me, fragrant citrus/lemon with a flower like almost perfumy smell. Smelling again, the smell is very complex, citrus, black pepper, bayleaf and eucalyptus without the mint, maybe even lavender. Now the smell was so complex, I had to ask my friend and collogue taste tester Aldo.
Although we almost always agree, he smells something different: Flowers, curry plant, black pepper, Mandarin orange, and all combined making him think of perfume as well.
Take only half a husk John Coupland said, and told me it plays your tongue so everybody tastes it different due to a bioactive component called Hydroxy-alpha sanshool is  So I actually listened and took only half, ready with an other half. Instantly I got the citrus, black pepper and the herbs with vague bayleaf and the acidity pleasant and very strong taste, not at all like the stuff I tried earlier. After the taste has gone all around your mouth, then your tongue starts acting up, like you get different tastes on different places. Then the fizz starts, almost like a light electrical current of those fizzy candies you use to eat back when we were kids. This is really exciting!
Now to be sure I asked Aldo again, to ask what he tasted:
He tasted flowers, grains of paradise, black pepper, then the anesthetic like you get from Acmella oleracea, then Mandarin Orange. 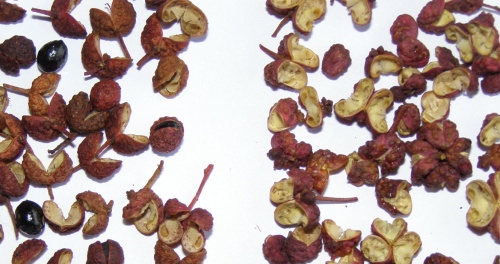 Now be warned about the cheap stuff, you can see it is brown not red, or has a lot of seeds in it. The seeds are in it to make it heavier, even though the seeds can not be used, it adds weight. So even though it might be cheap, you get less value for money, and a heap of seeds you can not use. The seeds are gritty and hard, and will not soften at all. So you need to take them out. It either lacks totally for any tingling or fizzing, or the play off tastes you get. It merely tastes only like old Mandarin oranges or cheap toilet lemon blocks.
Second warning, everything tastes different after eating Sichuan pepper, your beer, your desert and your cigarette if you still smoke. They say your tongue gets rebooted after eating it, and that my readers is true, fantastic! Get the good stuff and taste, then take a bit of dark chocolate. . . .  Not telling hihi

Now as the Sichuan flower pepper from John and Jenny Coupland from China Spice are super fresh I hoped to get some seeds I might try and seed. . . . I found a stunning 4 only in a bag I will not finish in at least 3 months, that is quality. John and Jenny, you gave us taste testers a great challenge, and a lovely experience to boot eh interest to the Sichuan cuisine!
Thank you !!